Current: Heading up the Stream with no Paddle

Whilst the battle between creativity and commerce wages on, the album is slowly dying and with it a crucial revenue stream. Albums were born from expanding storage spaces, technologies that allowed for broad and grand expression. This meant that more of an artist’s music could reach a greater audience. That innovation is seemingly moot in the face of the convenience and extensive databasing of the digital era. Although the album, to some, still remains a vehicle for conceptualisation and narrative, it seems that trends will continue to veer sharply towards streaming platforms as the medium in which we choose to consume music.

Lockdown has been a tumultuous time for the music industry. We rally in the streets, outside of parliament and across the internet, burdened by the affliction of financial hardship and political uncertainty. Gov.UK states that “15% of the UK Workforce are self-employed or freelance.” According to the Musicians Union, 94% of musicians work freelance “for all or part of their income.” These figures are astonishing and still, the gravity of the numbers does little to reflect the true bitterness of the situation. In a time when we must come together in order to surpass the obstacles humanity faces as a whole, it is a breath of fresh air to see companies such as Bandcamp choose to waiver their sales share at specific, pre-organised times creating incentives to drive sales. But, when it comes to approaching streaming platforms, pleas for a fairer discourse have been met with greed from those who seemingly have everything to give. As the life force of our industry dies, who do we look to to help?

Streaming is crucial in the discovery of new artists for many consumers. Business of Apps found that one-third of all music consumed through Spotify is via a Spotify generated playlist: a playlist created using an algorithm built to connect a user with artists that match the user’s interests. Spotify users enjoy an average of 25 hours of listening a month. That equates to 8.3 hours of listening (on average, per user) to algorithm-generated playlists. This works to the benefit of both the fan and the artist engaging them with one another. However, it has long been conjectured that streaming platforms work to the detriment of an artist. In a 2015 report, the European Commission concluded that streaming services displace record sales. On how streaming services could work to rectify this, they stated: “Spotify is better viewed as a form of bundled sales than as a promotional channel. Bundled sales of zero marginal cost products hold the promise of raising revenue, consumer surplus, or possibly both.” The report stated that, on average, a single Spotify stream generated a sum of $0.007 (£0.0052) to be paid by Spotify, to then be shared between the artist and label etc. In 2019 that figure is, as reported by digitalmusic, $0.003 – $0.005 (£0.0022 – £0.0037) a significant decrease despite Statista reporting a Spotify user growth from 91 million active monthly users in 2015 to 320m monthly active users at the day of writing in 2020.

Spotify calculates the amount they pay artists using a ‘Pro Rata’ model. This means that all revenues are collected and then distributed according to the share of the total streams of that period. This model is critically flawed, revenue generated by users interacting with an artist may be displaced to someone who received more overall streams. Through this model, five thousand streams equates to roughly $15 (£11). The revenue generated by streaming does little to offset the loss created by lack of record sales and whilst the catalyst of this loss is the former, we must ask, is there not more that can be done? The answer is not so simple. Musically provides a fantastic insight into the User Centric model and its alternatives. 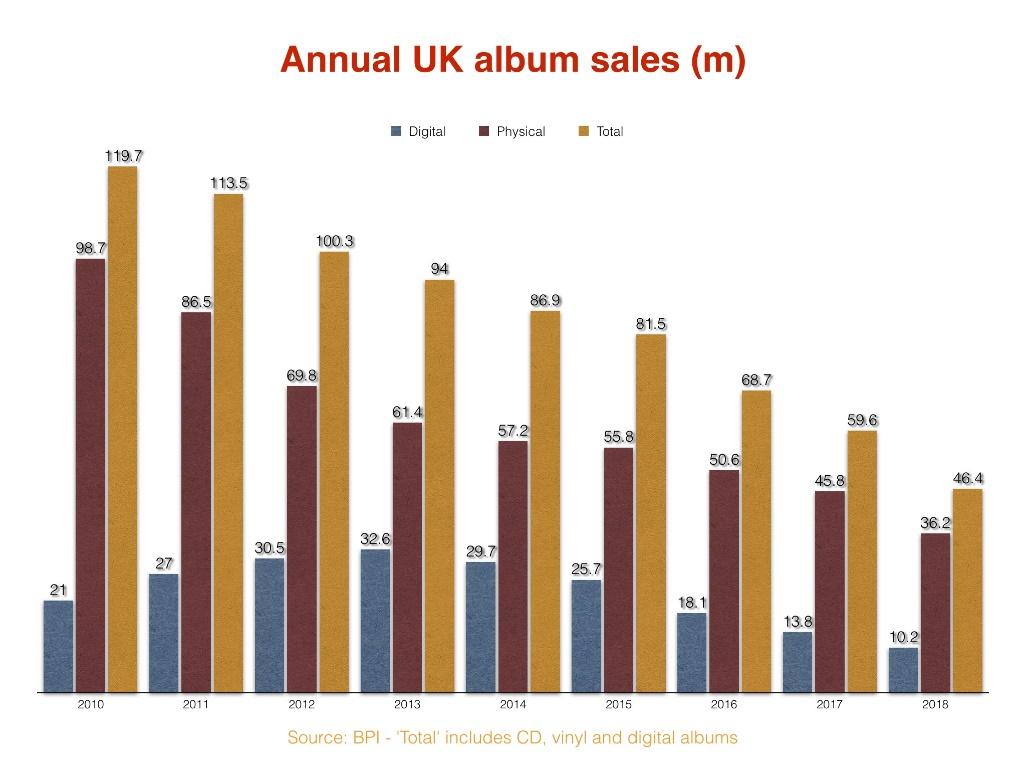 Touring is the most lucrative form of income for an artist and yet our departure from the European Union threatens that vital income. In the face of the continual decline of physical and digital sales in favour of streaming services, you can’t help but feel that companies like Spotify are snubbing those that make up the foundations upon which they’ve built their empire by continually undervaluing artists for their work.

In a materialistic world, contrastingly, the age of music ownership has perished and we have no one to blame but ourselves, the bastions of convenience, the consumer. We must stand together with and for musicians, as, without substantial change, they won’t be able to sustain themselves for our pleasure any more.

As the industry moves towards promises of attainable and successful independence via technological advancements and the utilisation of ancillary services, artists will be able to profit from their own music to a greater extent. We, the consumer, must play our part to create a viable market for both independent and signed musicians that does not devalue their effort and their right to succeed. With many of us streaming more than ever during the pandemic, I feel that it is time, now more than ever, that we, the consumer, took a more proactive look into how our habits are affecting the industry and what we can do as individuals to support our musicians. Buying an artist’s music in any format alongside merchandise generates a much higher and much more instant income. Buying a ticket to an online concert hosted by a local promotor or your favourite musician is a fantastic way to help provide them with a much more substantial income than regular streaming. Our industry deserves to succeed, it should not be held at the mercy of selfishness.